Mercy is a very popular award winning Nollywood actress , She’s featured in many Nollywood movies and she has produced a few also. In 2016 She was listed among the ten most famous people in Nigeria making her the most famous actor in Nigeria

EARLY LIFE AND BACKGROUND
She was given birth to in Lagos on August 28, 1984, even though she started out her primary school education in Calabar where she resides with her biological father. Mercy afterwards relocated to Lagos State when her daddy was transferred, where she continued her schooling at the Nigerian Navy Primary school.
The celebrity went to Rivers State Secondary School for her secondary education in addition to Nigerian Navy Secondary School in Port Harcourt, River State. Right after her secondary education, she auditioned for a role in ‘the Maid’ a movie that’s to launch her into stardom.
She hails from a family of 7 children and she is the 6th child. She talks very lovingly of her father, a former Naval officer, with whom she loves playing games. The attractive actress talks very little about the role her biological mother played in her life.

Mercy’s first attempt at acting as a maid in the movie “The Maid” shot her into the limelight. Since then she has featured in over 50 movies and has won several awards including the Best Actress at the 2013 Africa Magic Viewers Choice Award for her role in the movie “Dumebi The Dirty Girl”.
At the moment,Mercy is undoubtedly having the time of her life.
According to her she actually had just one inspiration and it was Genevieve Nnaji. When she got into Nollywood, lots of things later inspired her to do the things she does but she triggered her interest. She watched her in the movie “Sharon Stone” and she knew she wanted tO act.

She got married in August 2011 and in December 2012, gave birth to her daughter in the United States of America. Even though its been almost two years since her wedding, Mercy still giggled and spoke about her husband with such fondness as a newlywed.
She recently moved into her new home at Ajah, Lagos and dedicated her baby, an event which attracted major buzz.It was fun chatting with the actress who has taken a break off acting and is enjoying herself just being a wife and mother for now.

Speaking of her sexiness which does get her into lots of controversial issues.. People often say “The actress is endowed both back and front” meaning her breasts and buttocks.
She said she believes that sexiness runs in her family line, she described in an interview about her daughter below:
“For me, it just runs in my family. I don’t work out or do anything. I’m just trying now to work out and swim to lose weight and get back to work so Odi doesn’t get to call meOroboagain. When I bath Purity in the morning and I see the curve of her hips, I say “Oh my God, Odi. Purity has hips” then he says, “She is just 4 months old, shut up”.” Odi is her husband.

In an interview she also mentioned Few things about her husband and how they met, see below:

When did you meet him and how did the love spark between both of you?

“I met him in 2009. We had met before on a flight and I didn’t remember but we met again in 2009. He is a good person. I can’t really tell how it started. We kinda clicked and started dating just about the same month and it feels like we’ve been married for four years because since we met, we’ve been really into each other we’ve been really close.”

He must have known you were an actress then. How did this affect the way you started off your relationship?

Yes he did, but he didn’t know I was that big because he didn’t really follow the movie industry.

“Sometimes you meet some guys and they get intimidated about you but not with him. The first time we were supposed to have a date, he said “Let’s go to my house so you can cook for me” and in my mind I was like“Seriously, this guy doesn’t even know my name”. So I said “My name is Mercy Johnson” and he said “Yes I know”.”

She once got her hair barbed all clean like a baby because of a huge money she is to be paid to do that in a movie…
She is an actress with no much endorsement deal like others but she is often used and shown in movies.

She and co-actress Tonto dikeh are said to be in fight.. Always come for each other on social media.
November 2013 Movie Marketers threatened to blacklist her in the industry because of what they saw seemingly as her “high demands”.
She delivered another baby in 2014

She was said to have gone to a public event without wearing any panties which accidentally got her private part exposed a bit.
In 2011, her planned wedding to his current husband was said to have failed because she snatched another person’s husband. But they later debunked the rumour.
She took a really explicit photo with actor majid michel of him grabbing her boobs for real….

won the Best Actress Award With a movie titled “Dumebi The Dirty Girl”
November 3rd 2013 Movie Marketers threatened to blacklist her in the industry because of what they saw seemingly as her “high demands”.
Johnson won the 2009 African Film Award for best supporting actress. 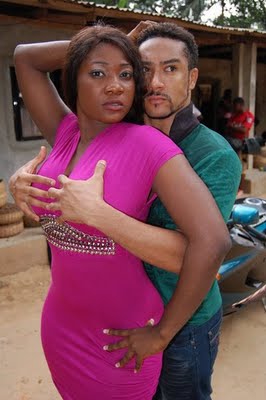