So its 2016, but we’ve decided to come up with a list of great Nollywood movies you might not have seen in 2015, below is a list 10 movies suggested by our movie critics to show you guys.
So if there is any one on the list that you’ve not seen you should check them out. You will find links to watch them on IrokoTV in each post.

Directed by Biyi Bandele (Half of a Yellow Sun), Fifty
follows the lives of four women – portrayed by Omoni Oboli, Ireti
Doyle, Nse Ikpe-Etim and Dakore Egbuson Akande – in the busy
metropolitan town of Lagos. The film premiered on the 13th of
December in Lagos, Nigeria, months after hitting the international
scene and being sold out in 4 days at BFI London Film Festival.
STILL IN THE CINEMA, GO SEE IT THERE.

The hilarious comedy is
centered on a kidnapping-gone-wrong ploy, and stars heavyweight actors
like Ramsey Nouah and Gideon Okeke to name a few. It was released in
September and directed by the award-winning Walter “Waltbanger” Taylaur
as a spinoff to the EbonyLife TV series, Married to the Game.
WATCH ON IROKOTV

Ini Edo and Joseph Benjamin
starred in this blockbuster produced by Emem Isong. A mysterious
stranger claims to be the lover of a woman’s late husband, and as you
can imagine all hell breaks loose. The movie was shot in Lagos, Nigeria
and released in the early part of 2015.
WATCH ON IROKOTV 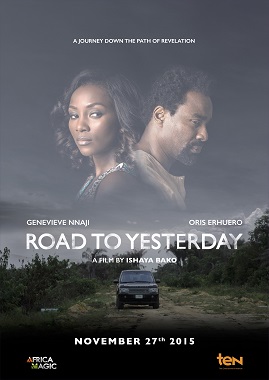 Road To Yesterday is a 2015 Nigerian road romantic drama film directed by Ishaya Bako. It stars Genevieve Nnaji and Oris Erhuero in lead roles, with Majid Michel and Chioma ‘Chigul’ Omeruah in supporting roles. The film, which is co-produced by Genevieve Nnaji, is the actress’ first effort as a producer.
STILL IN THE CINEMA, GO SEE IT THERE.

American-based Nollywood writer
and actress, Dtymi Ngozi Ibe released this heartwarming film in
collaboration with talented screenwriter, Ike Nnaebue. Starring Uche
Jombo Rodriguez, this intense thriller and drama was shot in Texas,
Houston and received rave reviews both locally and abroad
STILL IN THE CINEMA, GO SEE IT THERE.

Uduak Isong Oguamanam’s film, Falling
was dubbed the Romance Flick of the Year by critics and hardcore movie
buffs, thanks to its heartfelt plot and amazing acting featured. The
plot revolved around the thought-provoking idea of waiting for a loved
one to revive from a coma when all hope seems lost. Stars included
Nollywood’s it girl, Adesua Etomi, and award-winning actor Blossom
Chukwujekwe.
STILL IN THE CINEMA GO SEE IT THERE.

One part romance, one part crime,
the Department was a treat for Nollywood movie buffs this year. Desmond
Elliot, Majid Michel, OC Ukeje and Osas Ighodaro made up the film’s
star-studded cast, with Majid and Osas playing a couple in a tug of war
with a secret organisation they were once members of.
WATCH ON IROKOTV

Two ambitious politicians are drawn into a web of messy bureaucratic
games, while trying to maintain a front of normalcy to their partners at
home. Kalu Ikeagwu, Nse Ikpe Etim, Blossom ChukwuJekwu.
WATCH ON IROKOTV

An innocent young girl embarks on a journey in search of a sacred
antique pot to save the life of the only heir to the throne, however it
is a place where mortals are forbidden and her return is not guaranteed.
Bimbo Akintola, Olu Jacobs, Oge Indiana.
WATCH ON IROKOTV

A bachelor who has vowed to never marry hires a woman to give birth to a
child for him, with the plan that they go their separate ways after
delivery. Homla Danlada, Yvonne Okoro, Joseph Benjamin.
WATCH ON IROKOTV

DO YOU HAVE OTHERS YOU FIND GREAT NOT ON THE LIST?? SHARE WITH CO-READERS IN THE COMMENTS SECTION.